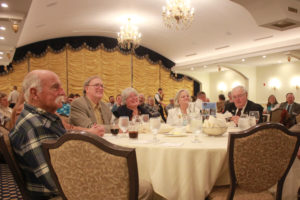 The culmination of NHFB’s grassroots policy development process occurs during the Meeting of the House of Delegates as part of each year’s Annual Meeting. Delegates, elected by their county Farm Bureau, met the morning of November 3rd to vote on the policies that will guide NHFB’s work in the coming year and to elect a slate of officers for 2019. The elected slate of officers is as follows: Denis Ward of Monroe – President, Joyce Brady of Columbia – 1st Vice President, Matt Scruton of Rochester – 2nd Vice President, Rebecca Stevens of Epsom – 2nd Vice President, Howard Pearl of Loudon – Treasurer.

The Annual Meeting Banquet, held the evening of November 2nd, recognized outstanding achievements and contributions to agriculture from NHFB members. To view the full list of awards given out that evening, click here.