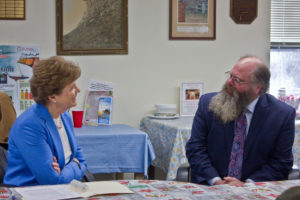 Senator Jeanne Shaheen speaks with dairy farmer Jamie Robertson, who along with his family, operates Contoocook Creamery in Hopkinton.

Concord, NH. – New Hampshire’s senior Senator heard from a dozen or so NH farmers and agricultural specialists last Friday at the New Hampshire Farm Bureau Federation (NHFB) office in Concord. Senator Jeanne Shaheen wanted to know how or if the partial government shutdown, now in its third week, is weighing on farmers in the Granite State.

“Right now we aren’t hearing from our members about many problems due to the shutdown, but that could change,” Said NHFB President Denis Ward. Hopkinton dairy farmer Jaime Robertson echoed those sentiments and cautioned, “A lot of it depends on how long this drags out.”

There are a wide range of programs and services that could be negatively impacted if the shutdown does indeed go on for months, including new dairy safety net programs agreed to in the latest Farm Bill. Bob Wellington, Senior Vice President of Economics, Communications and Legislative Affairs at Agri-Mark explained that the final language of these programs still needs to be written, signed up for, and then implemented. That is all being delayed due to the stalemate on government funding. No matter when the government reopens fully, Wellington advocated that these programs need to be made retroactive to January, 1st. 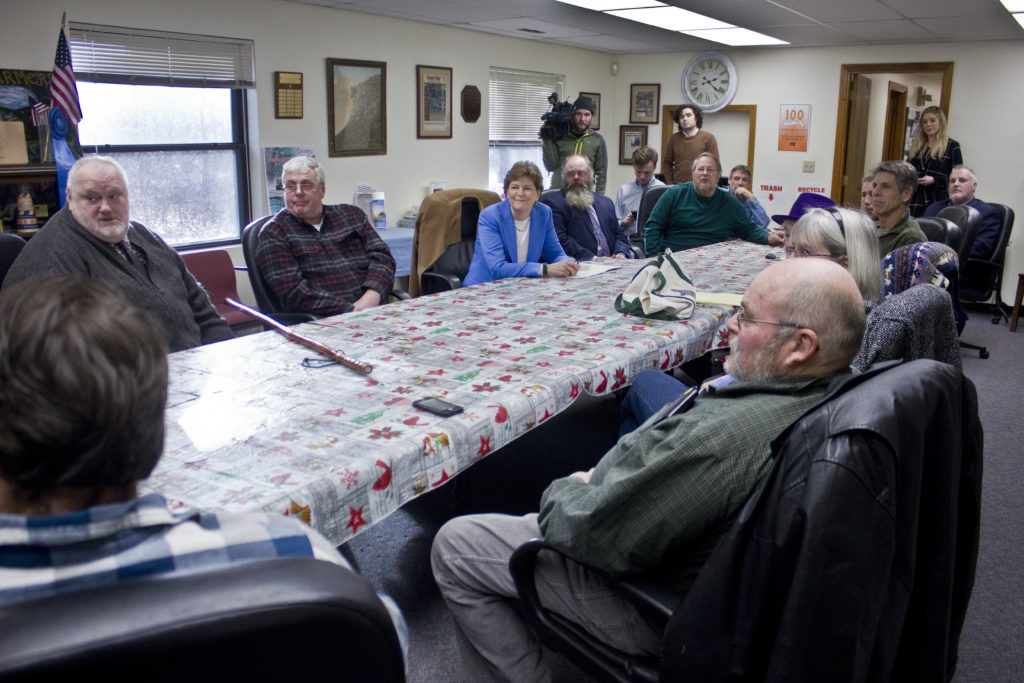 Senator Jeanne Shaheen (center) met with about a dozen NH farmers and agricultural professionals on Friday, January 4 to hear a wide range of concerns from repercussions of a lengthy government shutdown to trade tariffs and more.

Senator Shaheen noted that some services provided by United States Department of Agriculture are still being carried out but 50 percent of the employees at USDA are working without pay. Traditionally, those employees are paid later for the work they’ve already done. “Sorta like farming,” Epsom dairy farmer Stewart Yeaton laughed, “at least we still have a sense of humor.”

Agriculture, whatever the commodity, doesn’t wait around for politicians to come to consensus; cows still need milking, seeds still need planting, and crops still need picking. Concord farmer Chuck Souther explained how in 2018, during a time when the government was open, he lost $18,000 in unpicked strawberries due to delays in the processing and arrival of temporary laborers through the H-2A program. His concern being that a prolonged shuttering of the government could further interrupt that already burdensome process. Loudon grower Doug Cole, representing the ornamental horticulture industry, also spoke about the challenges of finding farm labor, although he has moved away from H-2A workers in his business.

While the Senator’s focus was on the effects of the shutdown, NH farmers took the opportunity to share their concerns on a wide range of issues including comprehensive immigration reform, troubles facing the dairy industry, trade tariffs, and regulatory challenges. New Hampshire farmers are resilient and will continue to work in the face of any adversity whether it comes from nature or politics.