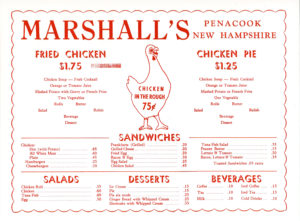 An old menu from the Marshall’s restaurant at the Stone Porch Lodge and Poultry Farm in Boscawen. The farm hosted summer boarders and featured the restaurant as part of what would now be called agritourism.

Since a New Hampshire Supreme Court Ruling last summer saying that agritourism is not defined as agriculture in the current RSA (RSA 21:34-a), New Hampshire Farm Bureau members and staff have been working closely with political leaders in both the New Hampshire Senate and House of Representatives to come up with legislation to clarify the RSA regarding agriculture here in New Hampshire and to unambiguously lay out the connection between agritourism and agriculture, keeping in mind the rights of towns and their planners to have local controls.

What some folks may not realize, however, is that agritourism is not a new practice springing up from a new generation of farmers looking to diversify their operations. Agritourism has been a part of the fabric of agriculture in New Hampshire for generations. If anything, the increase in attention of late is a revival!

When my Great Grandfather and his family made the trek in 1919, as has been described to me many times, from Center Strafford to Boscawen by way of a horse and dump cart freighted with all their worldly possessions and a cow and calf in tow, their destination was a farm in Boscawen that would come to be known as The Stone Porch Lodge and Poultry Farm. In those days, no matter what it was called, you did what you could to make a living. And on my family’s farm, what they did was host summer boarders and passersby in the farmhouse while the children forfeited their bedrooms to sleep in haylofts or out in tents. Whether the guests were studying or working in the area or simply tourists, the farmhouse would fill up with new residents all summer long.

And when these guests needed to eat, they only had to cross the front lawn and enter the farm’s restaurant which specialized in chicken dinners (the building remains today and is used as storage). You see, by having guests at the Stone Porch Lodge, my family opened up another market for their vegetables and poultry that most likely meant the difference between staying afloat and going under. Looking at the old menu today, you might not think a .75 cent meal could make or break a farm, but a summer in the 1930’s filled with a steady flow of paying customers could, absolutely.

I’ve heard stories of the guests so many times I feel like I was almost there myself. One that comes to mind was an English lady whose laugh was unmistakable and could be heard from any field on the farm. My Great Grandfather -legend has it- sparked one of her laughs when he went to set a cow out to pasture, as was a typical chore. He would carry an axe in one hand and a wooden post with a chain attached to it in the other. The opposite end of the chain was wrapped around the cow’s horns and wherever there was a suitable bit of land was where he would drive the post. He was halfway to his intended destination, that day, before the familiar laugh caught his attention and turned him around to find nothing attached to his chain and a loose cow a hundred yards back gnawing away at the grass in front of the farm’s namesake stone porch.

It’s memories like that that can provide lasting connections between the public and agriculture. Every chance someone gets to see a farm first hand and meet the folks providing them with food, fiber, or fuel is an opportunity for learning and a chance to inspire the next generation. It is so easy, these days, to see the world of agriculture through the lens of a super market or internet myth. The truth is not only much different, but much closer to you than you may realize!

Agritourism is not simply a way for farms to supplement their income, although no doubt it is becoming increasingly more difficult for farmers to subsist solely on crop or livestock production, it is and has always been a way to connect people to the land and develop memories that will last a lifetime (and in some cases be passed on through the generations).