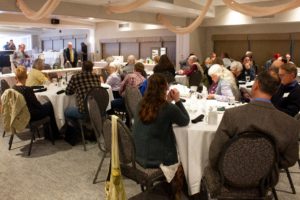 The culmination of NHFB’s grassroots policy development process occurred at the event during the Meeting of the House of Delegates. Each year, delegates representing their county Farm Bureaus meet to conduct the business of discussing and voting on policy resolutions and updates to the NHFB policy document. A number of issues were taken up this year including: hunting laws, labor, landowner rights, meat inspection, theft & vandalism, and water use reporting. The policy document guides NHFB’s policy work for its members.

Newly elected President, Joyce Brady, owns and operates CJEJ Farm in Columbia, NH, along with her husband Chris. CJEJ Farm is a diversified livestock operation offering cuts of beef, pork, lamb, chevon, chicken, and turkeys and produces their own small grains for feed. The couple also own and operate Colebrook Feeds Farm & Garden Supply in Colebrook, NH. “I’ve been involved with Farm Bureau since I was in college and have held many leadership positions working up from the Coos County Board of Directors through the State Board of Directors and now President of New Hampshire Farm Bureau,” Brady said. “I’m excited to be a leader in this important organization and look forward to working with New Hampshire’s farmers to advocate for agriculture.”

Other NHFB members were recognized for their outstanding achievements and contributions to agriculture. The following is a list of awards given out this year.

Outgoing NHFB President Denis Ward recognized the 2021 NHFB President’s Award winners Bob & Elaine Moore of Westmoreland, NH. Bob & Elaine have each served leadership roles in NHFB at the county and state levels. Bob has held the role of Cheshire County Farm Bureau President on multiple occasions, has been given the distinction of lifetime member to Farm Bureau, and is a previous recipient of the NHFB Profile Award. Elaine is currently the Cheshire County Farm Bureau Secretary and served as the Associated Women of NHFB President from 2018 – 2021. The President’s award is handed out annually to acknowledge an individual for their outstanding service to New Hampshire Farm Bureau. 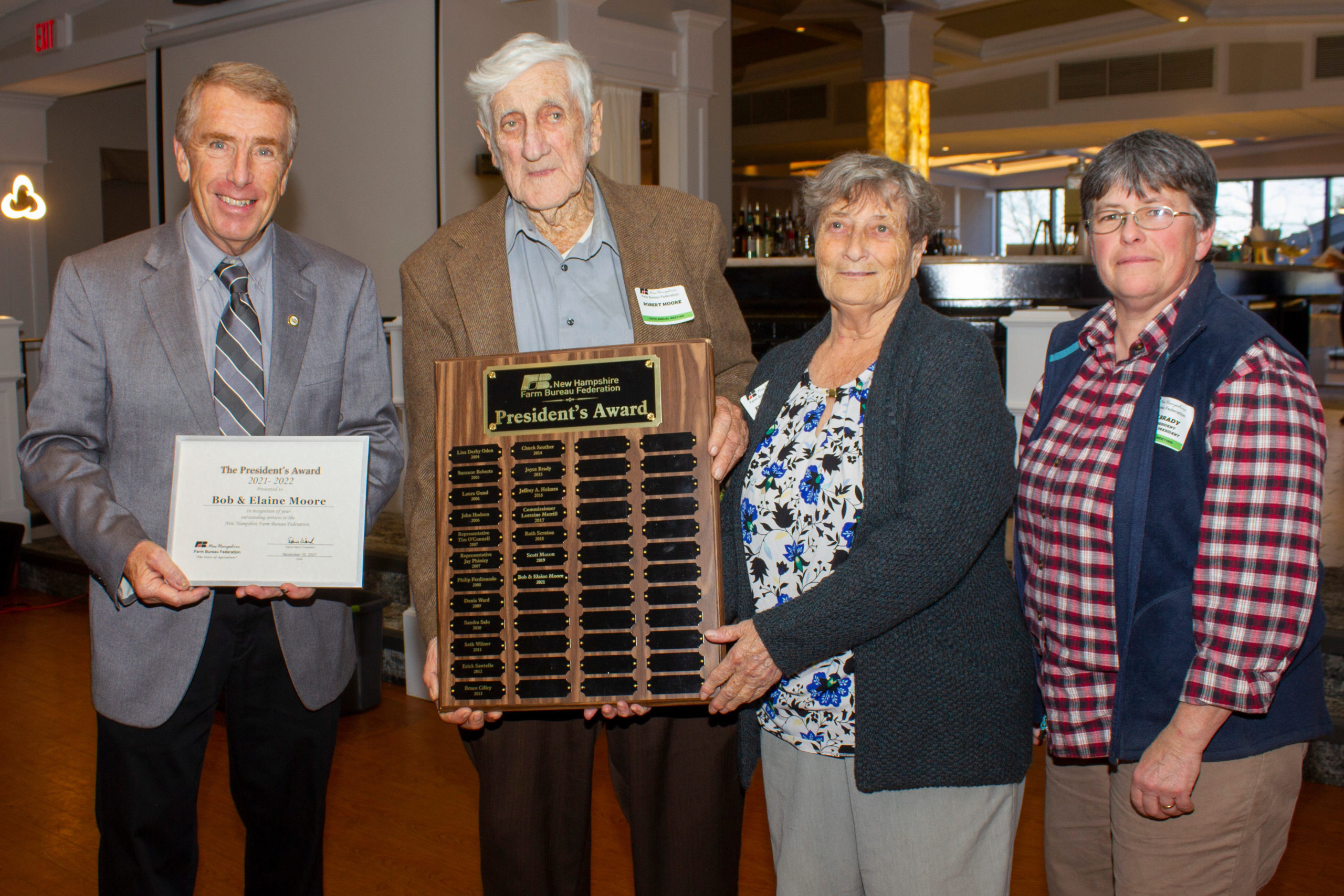 The Kenneth R. Marshall Memorial Award was created in honor of long time Farm Bureau member and employee Ken Marshall to recognize current Farm Bureau members who exemplify not only dedication and service to the agricultural community, but those who do it with kindness, generosity, and selflessness. This year’s recipient is Barbara Angevine of Laconia, NH. Barbara has been a Farm Bureau member since 1986 and a member of the Associated Women of NHFB for over 18 years. She has given her time to countless meetings, events, like the Belknap County School to Farm Day, and projects, including the Associated Women’s 100-Year Farm Book. 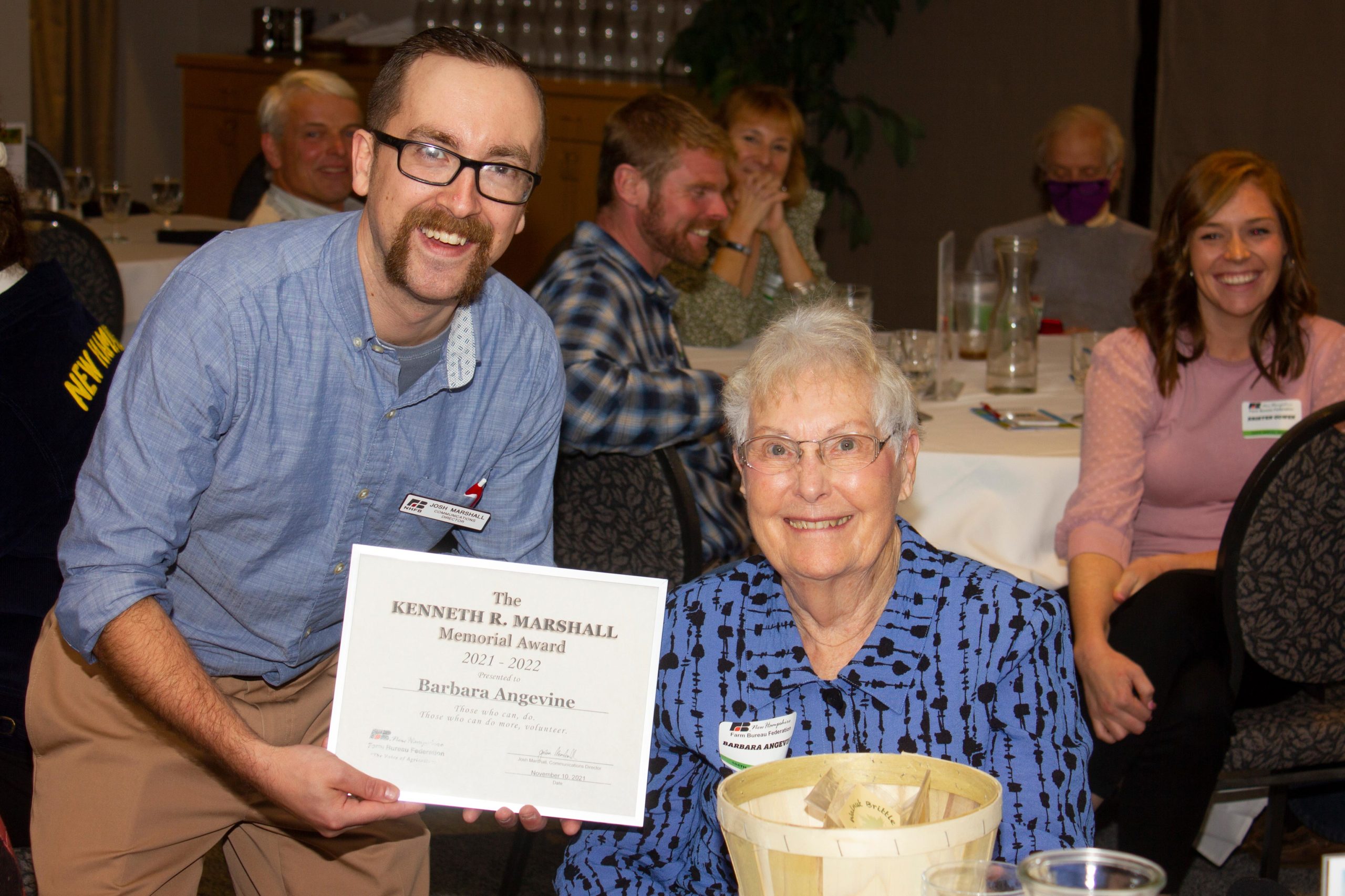 Hannah Morrill of Sunshine Pastures in Barnstead, NH, is this year’s recipient of the NHFB Young Farmer Animal Husbandry Award. Hannah demonstrated exceptional livestock practices on her family’s small farm raising beef cattle, sheep, goats, pigs, chickens, and more. The Animal Husbandry Award has been developed by the New Hampshire Farm Bureau Federation Young Farmer program to promote sound animal husbandry. Candidates for this award are nominated by their fellow Young Farmers and the judging is based on a set of criteria, including best management practices. 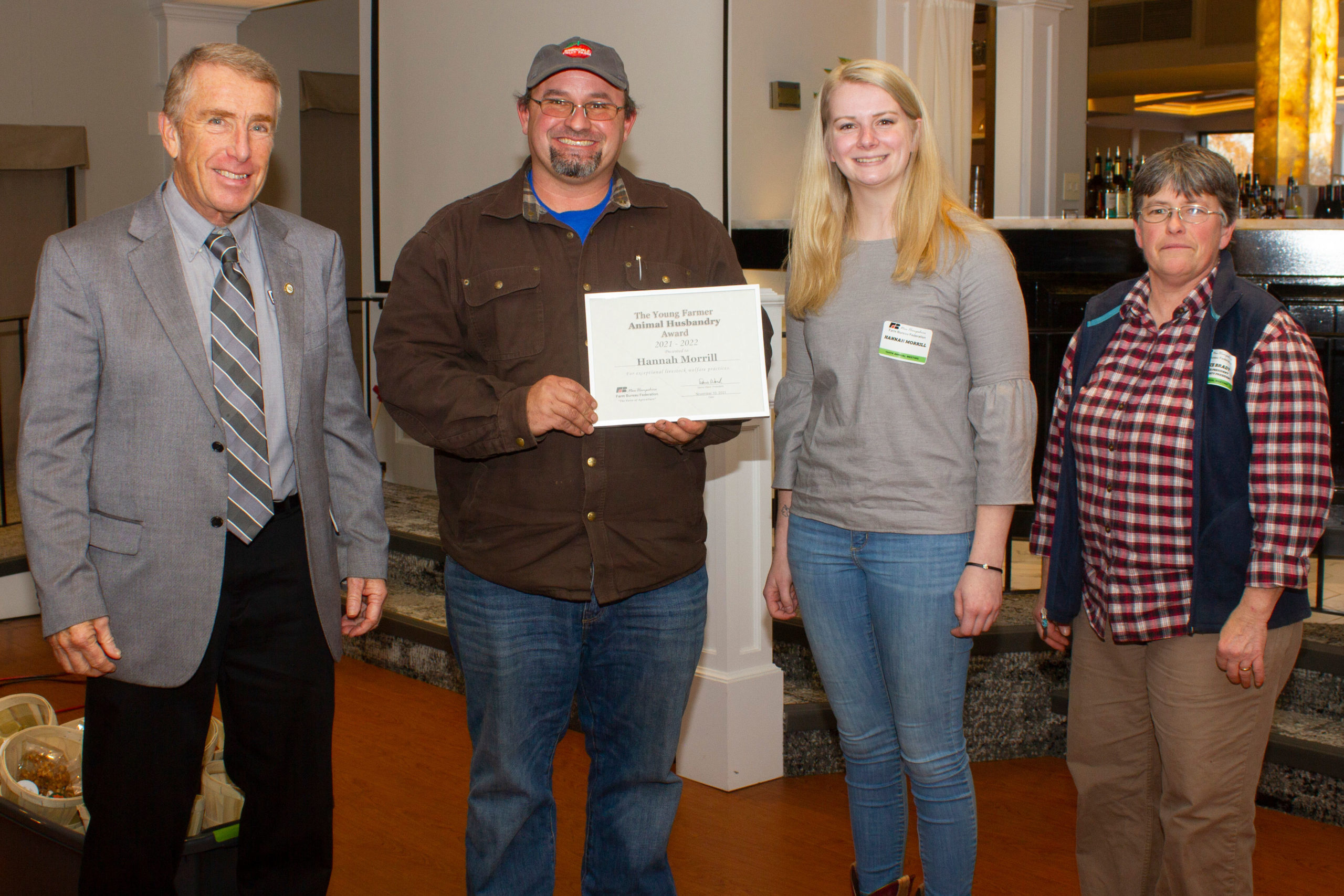 The 2021 NHFB Young Farmer Excellence in Agriculture Award was given to Ben Davis of Canterbury, NH. The award acknowledges the efforts of Young Farmers who do not derive the majority of their income from farming, but are actively contributing to agriculture and to their community.

Ben grew up involved in agriculture spending time at his grandparent’s farm in Canterbury while being involved in 4-H and FFA. He followed those pursuits to SUNY Cobleskill where he majored in Agriculture Equipment Technology. Today he owns his own company specializing in forestry mulching, field reclamation, and pasture renovation. He also works at Apple Hill Farm and harvests roughly 50 acres of hay. Ben has been involved with the NHFB Young Farmers Committee for many years serving on their board of directors and volunteering in many community service projects.

Ben will move on to compete with other Excellence in Agriculture Award winners from across the country at the American Farm Bureau Annual Convention in Atlanta, Georgia. 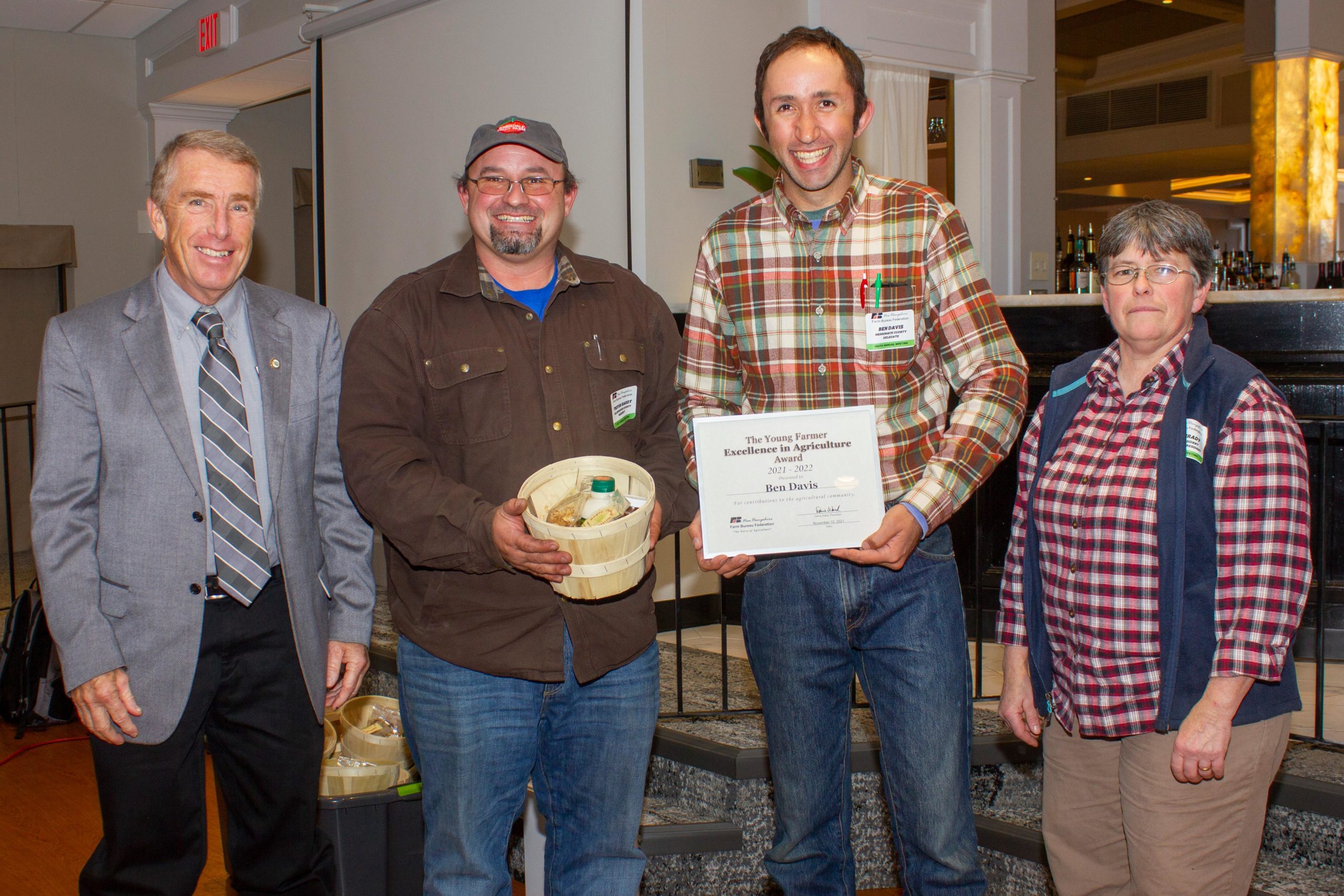 Amy raises a 60-head herd of registered Jerseys for milking and Hereford beef cattle on approximately 60 acres of farmland in Belknap County. Her love for dairy cows began at Windyhurst Dairy Farm as a young child and continued later at Echo Farm and eventually the University of New Hampshire. Amy and her husband Brian purchased a property in Barnstead in 2014 and started LorrenJoyce Farm from scratch. Today she sells beef cuts, raw milk, raw cream, hard aged cheeses, and raw butter as well as composted manure and cattle. Amy has also been involved with the NHFB Young Farmers Committee for many years spearheading the group’s Pumpkin Festival food booth, summer vegetable donations, and serving as Chair of the committee. Amy and her husband have two children, Hayden and Emerson.

As part of the award, Amy will receive the use of a new Kubota tractor for six months or 250 hours from Pinnacleview Equipment in Walpole. They will also move on to compete in the national Achievement Award competition at the American Farm Bureau Annual Convention in Atlanta, Georgia this January. 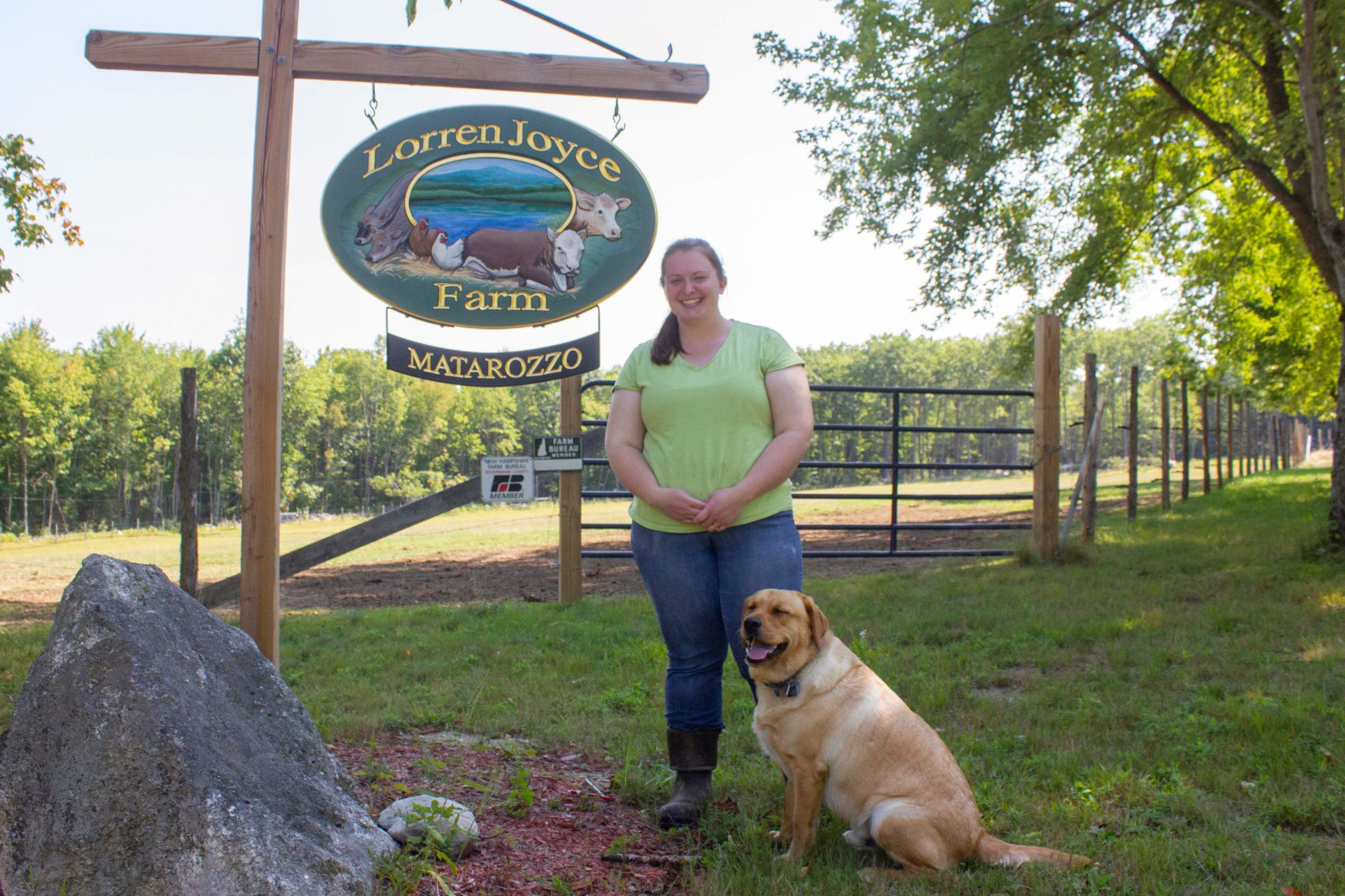 2021 Achievement Award winner Amy Matarozzo at her farm in Barnstead.

This year’s Profile Award winner is Henry D. Ahern, Jr. of Plymouth, NH. Henry is the third generation to own and farm the property in Plymouth, NH that now supports his Red Deer farm, Bonnie Brae Farms. His first twenty-seven deer arrived in February of 1994 and the farm currently supports approximately 200 deer.

Henry has been heavily involved with several farm organizations and farm activities since the farm’s inception. That includes the NH Farm Bureau and Grafton County Farm Bureau. He served as County president from 2006-2008 and 2013-2015. He is currently chair of the Livestock and Energy committees, and is on the Policy Development and Government Affairs committees. In the past, he has been recognized for excellence in membership recruitment. He has been a Grafton County voting delegate to the NHFB House of Delegates for several years. 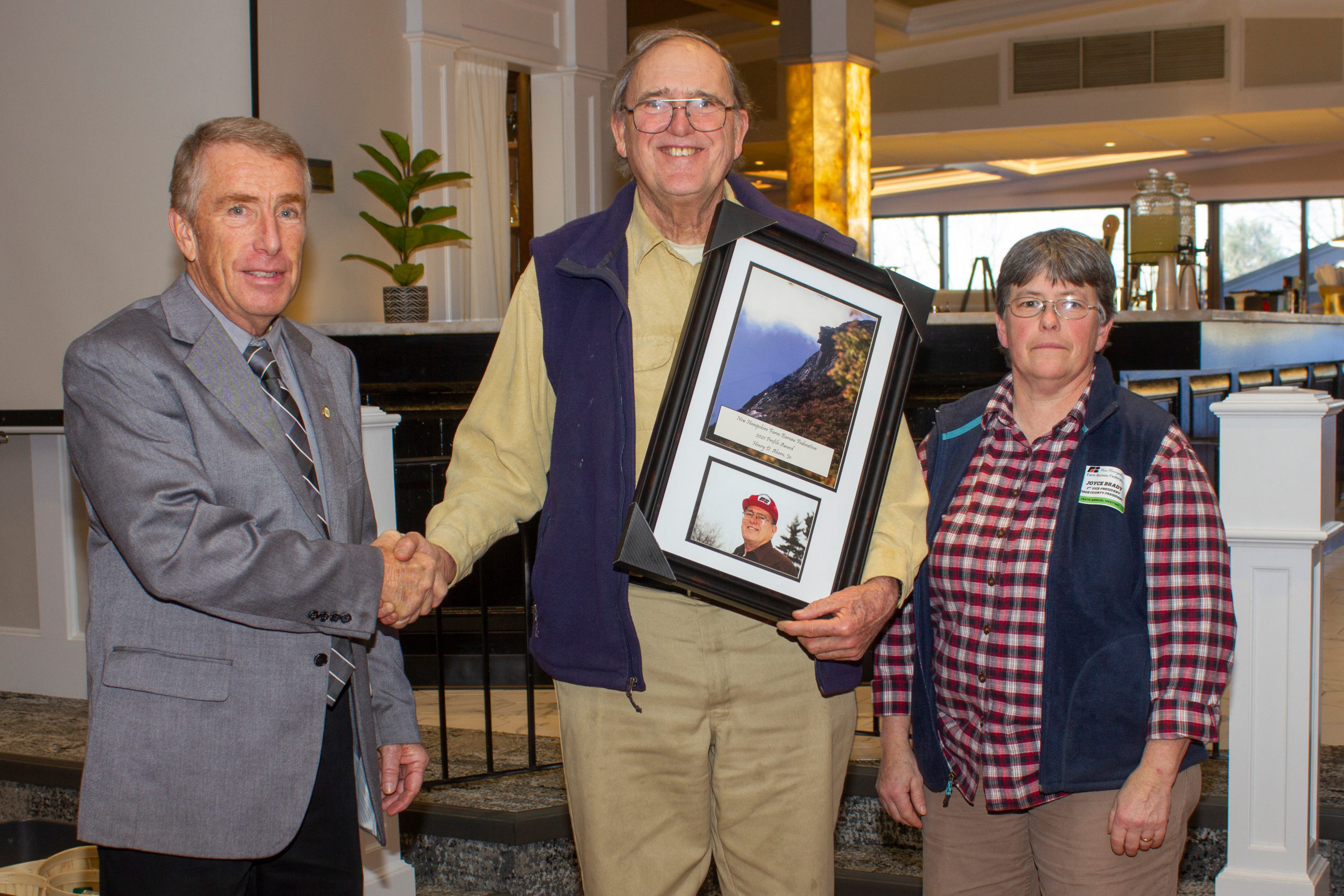 New Hampshire Farm Bureau (NHFB) is a non-profit federation, established in 1916, of New Hampshire’s 10 county Farm Bureau organizations which consist  of nearly 2,000 NH farm families and over 1,000 supporting members. NHFB is dedicated to advocating for and educating the public about agriculture. NHFB is a general farm organization where the members establish policy and direction through a member driven policy development process.