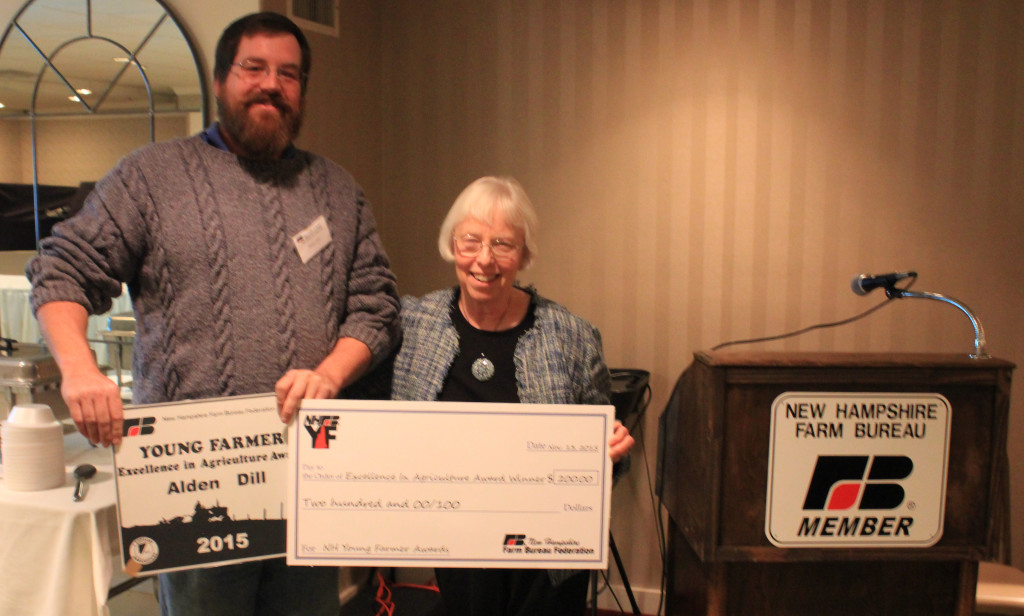 Alden Dill received the Young Farmer Excellence in Agriculture Award at the New Hampshire Farm Bureau Annual Meeting on Friday, November 13th. Presenting the award was Cynthia Blandini who was on the panel of judges for the award.

CONCORD, NH – Alden Dill of Deerfield was presented the Excellence in Agriculture Award at New Hampshire Farm Bureau’s Annual Meeting on Friday, November 13th. The Excellence in Agriculture Award recognizes Young Farmers between the ages of 18 to 35 who do not derive the majority of their income from an agricultural operation, but who actively contribute and grow through their involvement in agriculture, their leadership ability and participation in Farm Bureau and other organizations.

Alden has been involved with many organizations including Farm Bureau and 4-H for many years and was a Selectman in Northwood for 5 years before moving to Deerfield where he produces hay, beef, and maple products along with his wife and two children on their 130 acre farm. He makes time for his agricultural pursuits outside of his full-time job as an insurance salesman with the Robertson Agency. Recently, Alden was elected President of Rockingham County Farm Bureau.

For winning the Excellence in Agriculture Award, he received a custom embroidered work jacket courtesy of the New Hampshire Young Farmers Program and a monetary prize thanks to Fuller’s Sugar House and Wilson Farms.