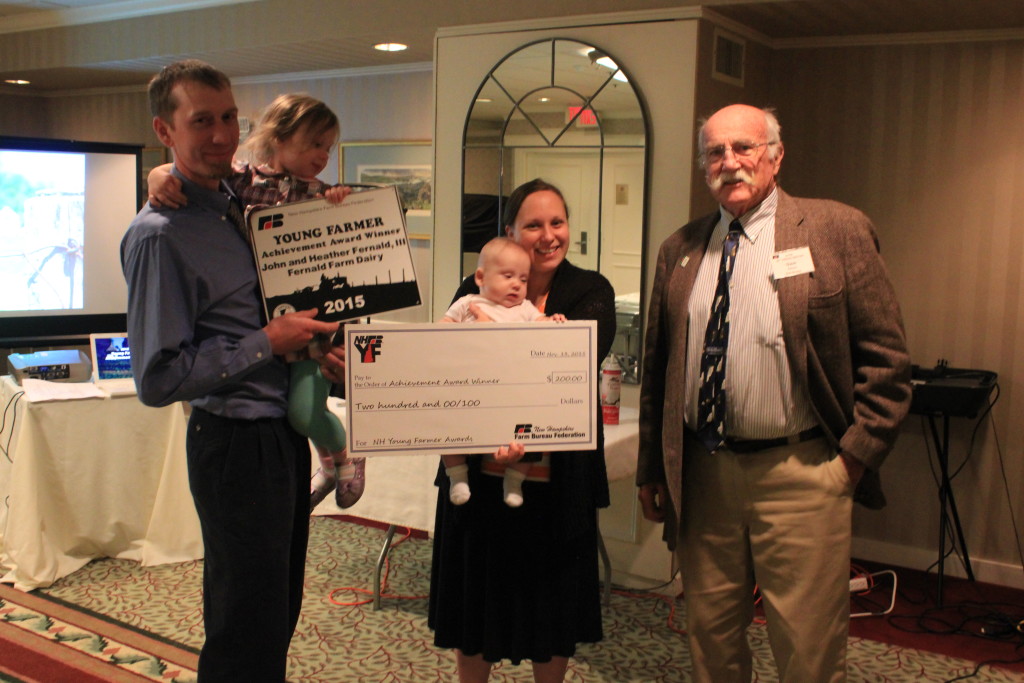 John and Heather Fernald, along with their two children, are presented the Young Farmer Achievement Award by Dave Babson at the New Hampshire Farm Bureau Annual Meeting on Friday, November 13th.

CONCORD, NH – John T. and Heather Fernald, III of Nottingham were awarded the Young Farmer Achievement Award at New Hampshire Farm Bureau’s Annual Meeting on Friday, November 13th. The Young Farmer Achievement Award competition is designed to recognize young people between the ages of 18 to 35 who have excelled in their farming operation and have shown leadership abilities through Farm Bureau and in their community. Candidates for the Achievement Award must be involved in production agriculture with the majority of their income subject to normal production risk.

John is part owner of Fernald Farm Dairy in Nottingham where he works alongside his family milking 170 cows and cropping 295 acres of corn and grass haylage. As he increasingly takes over the day-to-day operations of the farm, he is responsible for reproduction health management, herd health, facility maintenance, crop work, and more. Both John and Heather have taken on leadership roles in Farm Bureau. John is the Vice President of Rockingham County and Heather is both Secretary and Treasurer.

The Fernalds will now represent New Hampshire at the American Farm Bureau Annual Meeting in Orland, Florida in January with an expense paid trip provided by New Hampshire Farm Bureau. In addition, they will receive the use of a Kubota Tractor for six months or 250 hours courtesy of Kubota Tractor Corporation and Pinnacleview Equipment in Walpole. They also received a monetary prize thanks to Casa de Leche and Farm Family Life & Casualty Insurance of Albany, New York.