New Hampshire Farm Bureau Federation (NHFB) held its 103rd Annual Meeting on November 15th and 16th at the Hilton Garden Inn in Lebanon, NH. As part of the multi-day event hosted by Grafton County Farm Bureau, attendees toured local agricultural operations Tullando Dairy Farm in Orford and Poverty Lane Orchards in Lebanon. “It’s inspiring to see the diversity of agriculture around the state,” said NHFB President Denis Ward. “Our members enjoyed learning about the robotic milking machines at Tullando Farm and the hard cider operation at Poverty Lane Orchards.” Workshops, speakers, and competitions covering production techniques, advocacy, and the future of agriculture took place throughout the day in support of the theme “Reflection, Innovation, and Diversification.”

The culmination of NHFB’s grassroots policy development process occurs during the Meeting of the House of Delegates as part of each year’s Annual Meeting. Delegates, elected by their county Farm Bureau, met the morning of November 16th to adopt nearly forty new policies on issues such as dairy production, climate change, and UNH Cooperative Extension. Those policies, along with established NHFB positions, will guide NHFB’s work in the coming year. The House of Delegates is also tasked with electing a slate of officers each year. The elected slate of officers for 2020 is as follows: President – Denis Ward of Monroe, 1st Vice President – Joyce Brady of Columbia, 2nd Vice President – Tom McElroy of Newton, 2nd Vice President – Leandra Pritchard of Pembroke, and Treasurer – Howard Pearl of Loudon.

The Annual Meeting Banquet, held the evening of November 15th, recognized outstanding achievements and contributions to agriculture from NHFB members. The following is a list of awards given out that evening: 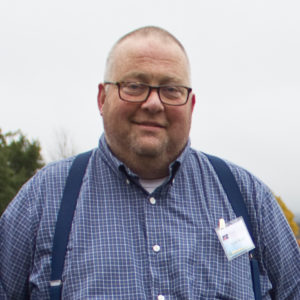 NHFB President Denis Ward recognized the 2019 NHFB President’s Award winner Scott Mason of North Stratford at the 103rd Annual Meeting of New Hampshire Farm Bureau. Scott has been actively involved at every level of Farm Bureau with a focus on policy and advocacy. Through serving on the state Policy Development Committee and testifying on agricultural issues at the New Hampshire State House, Scott has contributed to the success of numerous NHFB initiatives. Scott also represented the northeast this year as part of the American Farm Bureau Federation Federal Milk Marketing Order Work Group. The President’s award is handed out annually to acknowledge an individual for their outstanding service to New Hampshire Farm Bureau. 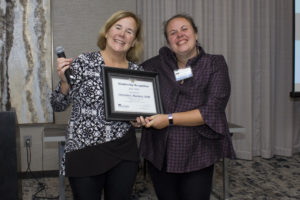 The Kenneth R. Marshall Memorial Award was created in honor of long time Farm Bureau member and employee Ken Marshall to recognize current Farm Bureau members who exemplify not only dedication and service to the agricultural community, but those who do it with kindness, generosity, and selflessness. This year’s recipient is Dr. Christina Murdock, DVM of Dunbarton. Dr. Murdock operates a mobile large animal veterinary practice that serves farmers across the state. She has shown a dedication to NHFB through her work serving on the NHFB Young Farmer Committee, at the county level through her annual Merrimack County Farm Bureau Veterinary Clinic providing affordable animal vaccinations, and to her greater community through volunteering and mentorship of FFA and Alvirne High School students. 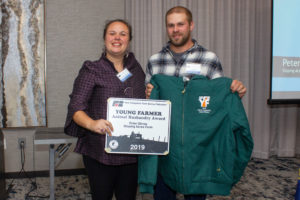 Peter Glines of Sloping Acres Farm in Canterbury, NH is the recipient of this year’s NHFB Young Farmer Animal Husbandry Award. Peter operates the farm along with his brother. They milk 140 cows, producing a rolling herd average of 23,500 pounds, and raise an additional 110 head of replacement  calves/heifers. The farm also grows 110 acres of corn for silage along with 60 acres of corn for snaplage and 160 acres of hay crops that they use for their own feed.

Also nominated this year was Erik Fredrickson of Top of the Hill Farm in Wolfeboro.

Caroline Crouch of Loudon, NH was named the winner of the 2019 NHFB Young Farmer Discussion Meet. Competitors in the Discussion Meet prepare thoughts and opinions on various subjects facing agriculture and cooperatively work towards a solution.

Caroline will go on to represent New Hampshire at the American Farm Bureau Discussion Meet competition in Austin, Texas this January.

Ammy Rice of Milford, Joe Garcia of Strafford and Olivia Pittman of Deerfield also participated in this year’s competition. 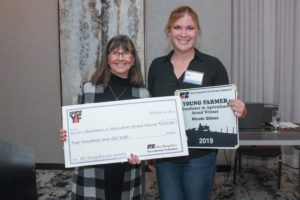 The 2019 NHFB Young Farmer Excellence in Agriculture Award was given to Nicole Glines of Canterbury, NH. The award acknowledges the efforts of Young Farmers who do not derive the majority of their income from farming, but are actively contributing to agriculture and to their community.

Nicole grew up in Milton, NH and her first agricultural passion was in equestrian sports, where she competed and gave riding lessons. After being introduced to dairy cattle at the University of New Hampshire, she changed course and eventually completed a master’s degree in Dairy Nutrition. She went on to be the herd manager for the UNH Organic Dairy Farm and currently works as a dairy nutrition and forage consultant for Agri-King Nutrition. Nicole has also served as Vice-Chair of the New Hampshire Farm Bureau Young Farmer Committee.

Nicole will move on to compete with other Excellence in Agriculture Award winners from across the country at the American Farm Bureau Annual Convention in Austin, Texas.

A panel of judges consisting of State Representative and Barbara Comtois, NHFB President Denis Ward, and John Scarponi from American National Insurance selected Nicole from among four nominees. Also nominated for the award were Ammy Rice of Milford, Morgan Mewkill of Chichester, and Zachary Mason of North Stratford. 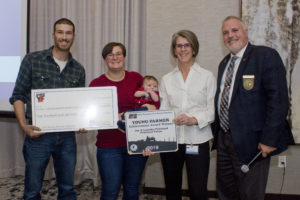 Jay & Leandra Pritchard were nominated by Merrimack County Farm Bureau. They are first generation farmers who own and operate Pritchard Farms in Pembroke, NH. They raise dairy replacement heifers and own a beef herd and laying hens. They farm over 300 acres of corn and grassland. They love living the lifestyle of a family farm along with their two kids, Millie & Walt, and are very passionate about the agricultural industry. They are both active members on the Merrimack County Farm Bureau Board of Directors and have been active members of the Young Farmer Committee.

As part of the award, the Pritchards will receive the use of a new Kubota tractor for six months or 250 hours from Pinnacleview Equipment in Walpole. They will also move on to compete in the national Achievement Award competition at the American Farm Bureau Annual Convention in Austin, Texas this January. 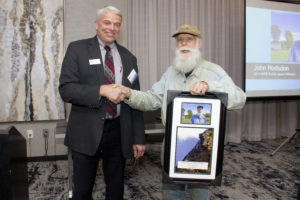 This year’s Profile Award winner is John Hodsdon of Meredith, NH. John grew up on the farm in Meredith that his family has owned since 1804, today known as Picnic Rock Farm. John had many responsibilities as a youth and kept up with his farm chores, but he also showed promise as an excellent student, especially in mathematics. His education took him all over the world, eventually earning a PhD in Biochemistry from University of California Berkley.

From the time he returned from out west in the late 70s until 2005 John operated the family farm growing vegetables, small fruit and Christmas trees. The farm also sold local products and baked goods he made on the premises himself. In 2008 John’s nephew Ward Bird took over operation of the farm to be the 7th generation to continue the tradition.

John has been a NH Farm Bureau member since the 1980s and served at both the county and state level receiving the President’s Award in 2006. He served as Belknap County Farm Bureau’s voting delegate to the NHFB House of Delegates Meeting every year from 1988 – 2017 as well as serving as the Chairman of their Policy Development Committee for many of those years. At the state level, John was a member of the State Policy Development Committee for most of his years as a Farm Bureau member and most notably contributed to the issues of water quality standards, Current Use Law, and GMO legislation.

In addition to Farm Bureau, John has also been active in the Belknap County Conservation District. Following in his father’s footsteps (John’s father Marshall founded BCCD), he became a Supervisor of the BCCD in 1982 and served as Chairman for over 32 years. More recently he stepped back to serve as Associate Supervisor. John became the BCCD representative on the North Country Resource Conservation & Development Council in 1980, which he continues to be today. In 2016 John represented the Hodsdon family as the National Association of Conservation Districts recognized the family for their “decades of commitment to conservation.”