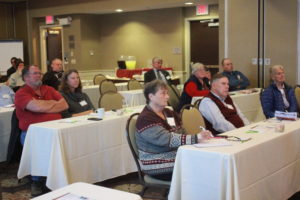 New Hampshire Farm Bureau Federation (NHFB) held its 101st Annual Meeting on November 10th and 11th in Keene, NH. The event, hosted by Cheshire County Farm Bureau, offered farm tours, workshops, and competitions along with a chance to celebrate the accomplishments and achievements of NHFB members. 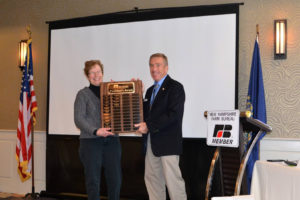 The delegate session also included a presentation of the 2017 NHFB President’s Award to NH Department of Agriculture Commissioner Lorraine Merrill. The President’s award is handed out annually to acknowledge an individual for their outstanding service to New Hampshire Farm Bureau.

Merrill has served as Commissioner of Agriculture for the last 10 years and has been a stalwart advocate, marketer, and ally for agriculture in New Hampshire. She is also a third-generation dairy farmer and worked as a freelance agricultural journalist for many years prior to being appointed Commissioner.

For more information about other awards and recognition handed out at the Annual Meeting, view the NHFB News Blog