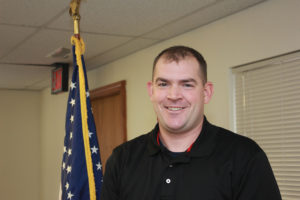 Concord, NH – Glen Putnam has been elected Chair of the New Hampshire Farm Bureau Federation (NHFB) Veterans in Agriculture Committee. The Veterans in Agriculture Committee was approved by the NHFB Board of Directors in December and held its first meeting in March. The stated mission of the committee is to recruit, educate, support, and promote veterans and their families in agriculture.

“Growing up I was surrounded by both farmers and veterans,” Putnam said, “I couldn’t decide which one I wanted to be, so I did both. Now to be working with Farm Bureau to bring the two together is both an honor and a privilege.”

Putnam, who is also President of Grafton County Farm Bureau, currently serves in the United States Navy Reserve and is the owner/operator of Winsome Farm Organics in Piermont.