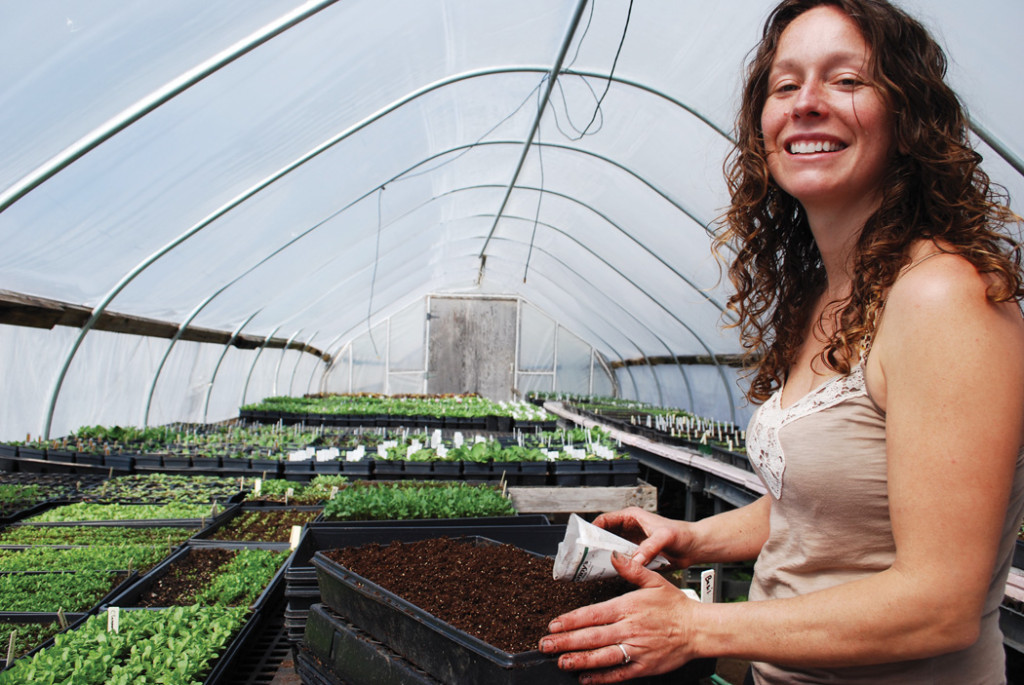 Tracie Smith of Fitzwilliam is one of the 1,358 principal women farm operators in the Granite State.

A male dominated industry is typically how agriculture is perceived.  Men continue to be the main operators however, the newly released results of the USDA – National Agricultural Statistics Service indicate some interesting findings when it comes to women.

Tracie Smith of Fitzwilliam, N.H. is one of these women who has survived the trials and tribulations of farming. As the owner operator of Tracie’s Community Farm, LLC, a CSA (Community Supported Agriculture) system that brings members of the community and the farm together to mutually benefit. Since starting in 2001, Smith has grown her business to over 350 CSA members.  “I wanted to make it work,” said Smith. “It has taken perseverance and drive to keep doing it.”

Perhaps it is this type of determination that has New Hampshire women faring well in comparison to national statistics, which declined. Smith credits her father’s backing and her frugal existence in the early years. She built her business on her father’s land and was willing to live within her means. “I attribute my success to having little debt and family support,” noted Smith while planting the next crop of herbs. “It also took a crazy amount of energy, working 14 hours a day in the beginning. But that’s what got my business to where it is today.”

It took some time for Smith to find her own property that would meet her CSA vision. After finding land, it took overcoming the many obstacles along the way, such as financing her 33 acre farm. “In general it is always more challenging as a single person in regard to financing, maintaining, operating equipment as well as bookkeeping, planning and management,” mentioned Smith. “But it has worked out and I’ve been able to do my thing.”

Once Smith took ownership in 2008 she was off to a good start.  “I had an established customer base and found a strong support for local farmers in the area,” said Smith. “I never wanted to leave my customers and my dad’s place is about 40 minutes away, which is close enough for those who want to continue being part of the CSA.”

Smith is passionate about growing produce and connecting people to their food source. She is truly motivated by hearing what her customers have to say. “I’m emotionally driven from the feedback and comments of appreciation I get from people,” said Smith with a giant smile. “I often hear from mature women, ‘look what she has done.’ I didn’t think it was a big deal because I was too busy doing what needed to be done to make it work. But it’s still nice to hear.”

Beth Hodge of Hindsdale, N.H. is a dairy farmer and co-owner operator of Echo Farm alongside her sister Courtney. The sisters started out with five heifers in 1990 and have grown the herd to 80 cows. In addition to selling their milk wholesale, they decided to add value to their product by making pudding. The pudding facility was established 1997 and currently produces over 25,000 pounds of pudding a month in a variety of flavors.

Hodge credit’s the success of the business to being at the right place at the right time and her family’s ability to work well together. In addition, there have been some major changes since the beginning. “When we first started, it was harder to get product in the door at grocery stores,” said Hodge. “Things are lot different now with the local food movement and an increased demand for local products. Stores needed to figure out a way to make room for this market demand.”

To give the pudding a unique marketing edge, the farm undergoes a humane livestock inspection and is certified humane. Women tend to gravitate towards employment at Echo Farm, paying attention to detail as well as enjoying the nurturing and feeding of calves.

Numerous teenaged-girls have worked at Echo Farm over the years. As an industry leader and current President of Cheshire County Farm Bureau Beth Hodge tries her best to set a good example. “If they show interest in something we work at expanding their experience,” said Hodge. “Hopefully it benefits them with their future endeavors.”

Since Echo Farm has met the test of time, Hodge believes they are perceived differently now. “People didn’t take us seriously at first, I’m not sure if it was because we were women or if it was that we were new to the dairy business,” said Hodge. “Now that we have been around for a while I feel that we are seen in a different light.”

Another significant item to note is New Hampshire’s first female Commissioner of the Department of Agriculture, Markets and Food Lorraine Merrill. She is one of nine women in charge of state departments of agriculture in the United States. As a dairy farmer and the overseer of the state’s agriculture department she is well aware of the challenges women have in the business of farming. “There are boundless challenges in agriculture,” said Commissioner Merrill. “But there are many ways to do it and that’s the great thing about it.”

Looking back at her life, Commissioner Merrill has been a farmer her entire life and involved in the industry in different capacities. “I’m grateful for the opportunities agriculture has provided to create the kind of life we have,” said the Commissioner. “I was able to be a stay at home mom while helping out on the farm. I gradually took on more responsibility and developed my freelance writing, which proved to be a great loop back to our farm.”

Women of past generations who paved the way mustn’t be forgotten. Commissioner Merrill shared a story about being contacted in 2002 (census data had been collected since 1997) by a Boston Globe journalist when the results came available for women operators. Commissioner Merrill recalls, the Boston Globe newsperson commented on this ‘new trend’ of women in agriculture. “Women were always there,” she recalls saying. “My grandmother and many women like her contributed to the farm and were never recognized before.”

For women considering a career in agriculture Commissioner Merrill’s advice is clear. “Follow your passion,” noted Commissioner Merrill. “Get smart about your business and the economics of it. For some women this may be their background and for those who don’t, they should seek out mentors.  Education is important in many levels. Fill in the gaps with extension and by other means.”

As the Census of Agriculture proves, the industry is always changing. Considering this constant evolution, women are likely to continue redefining their role by being a larger part of agri-business and the farming community.