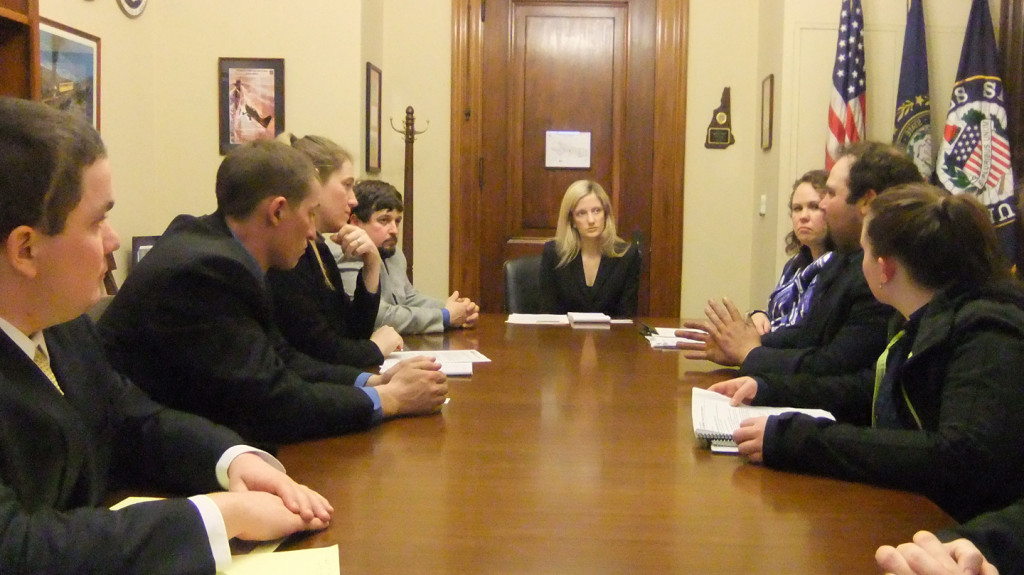 Washington, DC – The Farmer Identity Protection Act, European Union geographic indicators, the Clean Water Act and broadband deployment were the main topics discussed by the N.H. Farm Bureau Young Farmers while advocating for agriculture in DC.  Eight Young Farmers travelled to Washington last Friday (April 4) to speak to legislators about issues impacting farmers in the Granite State and across the country.

The delegation included Dr. Christina Murdock of Nottingham, Amy Gowell Drogue of Derry, Chelsea Kruse of Keene, Brian Matarozzo of Derry, Zachary Mason of North Stratford, Robert Bevard of Sanbornville, Jake and Valerie Drown of Webster.  The group met with staff members at the offices of Senator Ayotte, Senator Shaheen, Congresswoman Shea-Porter and Congresswoman Kuster.  Throughout their visits to each policymaker’s office the Young Farmers’ message was clear — “Agriculture is good for New Hampshire.”

To ensure that the farming community is protected, the Young Farmers requested N.H. federal lawmakers support the Farmer Identity Protection Act (S. 1343 H.R. 4157).  Valerie Drown, the Young Farmer chair and leader of the advocacy effort, explained the notion behind the proposed legislation.  “The Farmer Identity Protection Act would prohibit the EPA from disclosing private and confidential information of livestock and poultry producers to the public,” explained Drown.  “This legislation is to prevent a reoccurrence of the agency releasing personal information as they did in 2013 in response to the Freedom of Information Act.  Over 80,000 farmers’ information was given to several environmental groups, which poses as an agri-terrorism threat.”

Zachary Mason of Northwinds Farm in Coös County had the opportunity to express his concern in the trade dispute with the European Union.  “Dairy farms in New Hampshire and across the nation would be impacted by the proposed agreement,” mentioned Mason.  “Common names such as feta, parmesan couldn’t be used here in the United States, which would cause great confusion for consumers.  For that reason we are against this proposal.”  The majority of congressional staff members assured the Young Farmers that New Hampshire’s federal policymakers have already signed a letter to Agriculture Secretary Vilsack and U.S. Trade Representative Froman, urging a push back against the EU to restrict U.S. cheese exports under the guise of protecting its geographical indicators.

The delegation also discussed the EPA’s proposed waters rule released on March 25.  “The EPA proposal poses a problem for New Hampshire and American farmers,” noted Young Farmer Chair Valerie Drown.  “Under the EPA’s new rule, waters and even ditches would be regulated.  The rule includes waters that are not wet most of the time, which is often the case in New Hampshire.”

With rumbles of Farm Service Agency (FSA) offices closing across the country in 2015, the Young Farmers discussed the need for broadband to be accessible in rural communities.  “If the USDA is planning on providing programs online, then farmers need reliable internet,” said Drown.

Each year the Young Farmers coordinate a trip to DC.  “Ensuring that our voice is heard on Capitol Hill is vital to Young Farmers,” noted Drown.  “We need to continue to deliver our message so that our legislators know that agriculture is important to the future of New Hampshire.”