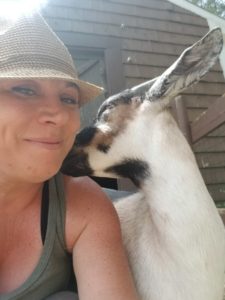 Stacy Downs poses for a selfie with one of her goats. Stacy found her opportunity to pursue farming in May of 2018, when her dream farmhouse went up for sale. After purchasing it, she dove right in with growing vegetables and raising chickens and goats! (Photo credit: Stacy Downs)

To choose to be a farmer is not a choice to make lightly. It is an infinitely large commitment that can destroy you or bring you the most beautiful satisfaction. The one thing about farming, that I try to explain to people who come to me for advice, is that you can never assume that your hard work will pay off or that your hard work is ever done. With that being said, I would not ask for a different life than that of growing my family and neighbor’s food or raising animals. It has brought me a contentment that does not exist elsewhere in this world, and of that I am certain.
As a child in the early 80’s, my Dad moved our family to this little town of Effingham, whose population, back then, was around 400. There were gardens and fruit bearing trees on our property and I absolutely loved to watch everything blossom and grow. It was like clockwork every year. I would wake in the morning to the sound of the rototiller just before Memorial Day every spring, which meant that it was almost time to plant the beans! It seems like such a funny thing to get excited about now that I think of it. We had a small garden back then, and I believe that it’s where I caught the bug for working in the soil and growing things. It’s also when I decided that when I became “rich and famous,” as my four-or-five-year-old brain assured me that I would be, that I was going to purchase the house right down the street from my childhood home.

The house was just a little white farmhouse on a few acres with a lovely old barn. The couple who owned the home back then had several Morgan horses and I remember when I was allowed to go into the barn and see them up close. I fell in love with everything about them. I loved the smell of the hay and the sound of their hooves on the old wood barn boards. I knew then that once I was finally “rich and famous,” that I would not only have the old farmhouse, but I would have farm critters to care for and raise as well. I had some pretty big plans for someone who had yet to start kindergarten.

Fast forward to the late 80’s

In the late 80’s my Aunt Judy sold her little camp in the Ossipee Mountains, and purchased, what was previously known as Dow’s Apple Orchard, which was located in Tuftonboro, NH. It was a sprawling orchard of 50 or more acres with a few acres of highbush blueberries. The orchard was absolutely gorgeous, but the house was in nearly original condition, dating back to the mid to late 1800’s. She recruited myself and my two younger sisters to help scrape wallpaper, fill cracks in the old horsehair plaster, and other miserable tasks for nine-year-old kids. It was the first time that I learned about old houses and how they were built, and that just because a house is old and dull, doesn’t mean that it can’t shine again. Every spare minute that I had, I was there, working, learning, and learning to appreciate bringing something back to life. It was my first “job.” She told me that If I did a good job helping with the house, that I could work on the farm that summer. It was all I wanted to do.

I spent days at a time at that farm throughout my childhood. Leaning about apples, peaches, pears, grapes, blueberries, how to care for the earth so that the crops would be bountiful, how to care for the trees. I remember that she would always be canning something. From rosehip jelly to salsa. Everything was available for purchase in the farm stand.

We picked blueberries by the bushel and would supply Bly Farm in Wolfeboro with as many orders as we could fill. Between my aunt, my sisters, and my four cousins, we probably would pick a thousand pounds a year. It seemed it anyhow. We all learned to appreciate the value of hard work and the pride that you can take from providing people with a good food source. Those summers spent there working, were absolutely the foundation from which I built the life that I live now. Those were the most influential times for me as a child, and I am incredibly grateful to have had such an inspirational person in my life. To watch my aunt start from scratch and to create something that ended up being so important and that brought so many people happiness was just incredible.

Growing up, I always wanted to farm. I just never really had the opportunity to do so until May of 2018.

I had picked my daughter up from school one day, and noticed that the house that I wanted to buy when I was “rich and famous” was EMPTY!!!! I couldn’t believe it. It had been in only two families since 1880. I immediately called my sister, who is a realtor, so she could look into it for me. Then I got the phone call from her. It was to be sold at auction that next day. I scraped together every single penny that I had, and arrived the next day at 2:30 P.M. I was the only one there at 3:00 when the auction started. Guess who the winning bidder was? 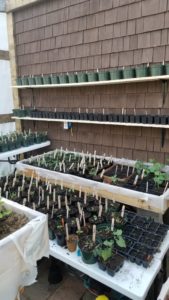 Spring plants wait to arrive at their final destination in the gardens of Whispering Pines Farm in Effingham, NH. (Photo credit: Stacy Downs)

Almost immediately we began repairs, found a large chicken coop, and built new fence. We moved in around the end of September 2018. By the time that spring came around, I was tilling the ground, making garden beds where the horse pastures once stood. I ordered chicks and raised them as well. We were growing food and eating our own eggs. Next came the goats, so we had milk and cheese. We built the farm stand onto the house with recycled material that I bartered for with goat milk, and we had a farm. It came together with blood, sweat, and tears, but we were able to provide the community and neighboring towns with wholesome, clean, healthy food and it was wonderful.

Some nights I am not done with farm chores until 8:00 or 9:00, and I fall into bed just to wake up and do it all over again. I truly wouldn’t trade it for anything. My daughter has learned many of life’s lessons right here. She has established a work ethic, attention to detail, and perhaps most importantly, empathy toward other living beings. I also hired my nine-year-old nephew, Rylan, this summer, as he wanted to learn to be a farmer. I watched him find his happy place on a farm and hope that when he is older, he will fondly remember his time here at Whispering Pines Farm. Maybe he will even carry on this tradition of the old ways. I simply want to teach and provide. I believe that the root of the reason we get into this commitment called farming is just as simple as that: To teach and to provide.

There have been many visitors to our little farm, and we welcome them with open arms. Many are from urban areas, some never before stepping foot on a farm, or seeing barnyard critters in person. We hope that when they leave, that they take some knowledge with them. That they understand the work that goes into creating the food that they eat. That they understand the simple complexity of animals. Mostly, we hope that they take with them that many small farms, small food producers, we care very much about keeping them safe and healthy by providing them with food in the way that it was meant to be. 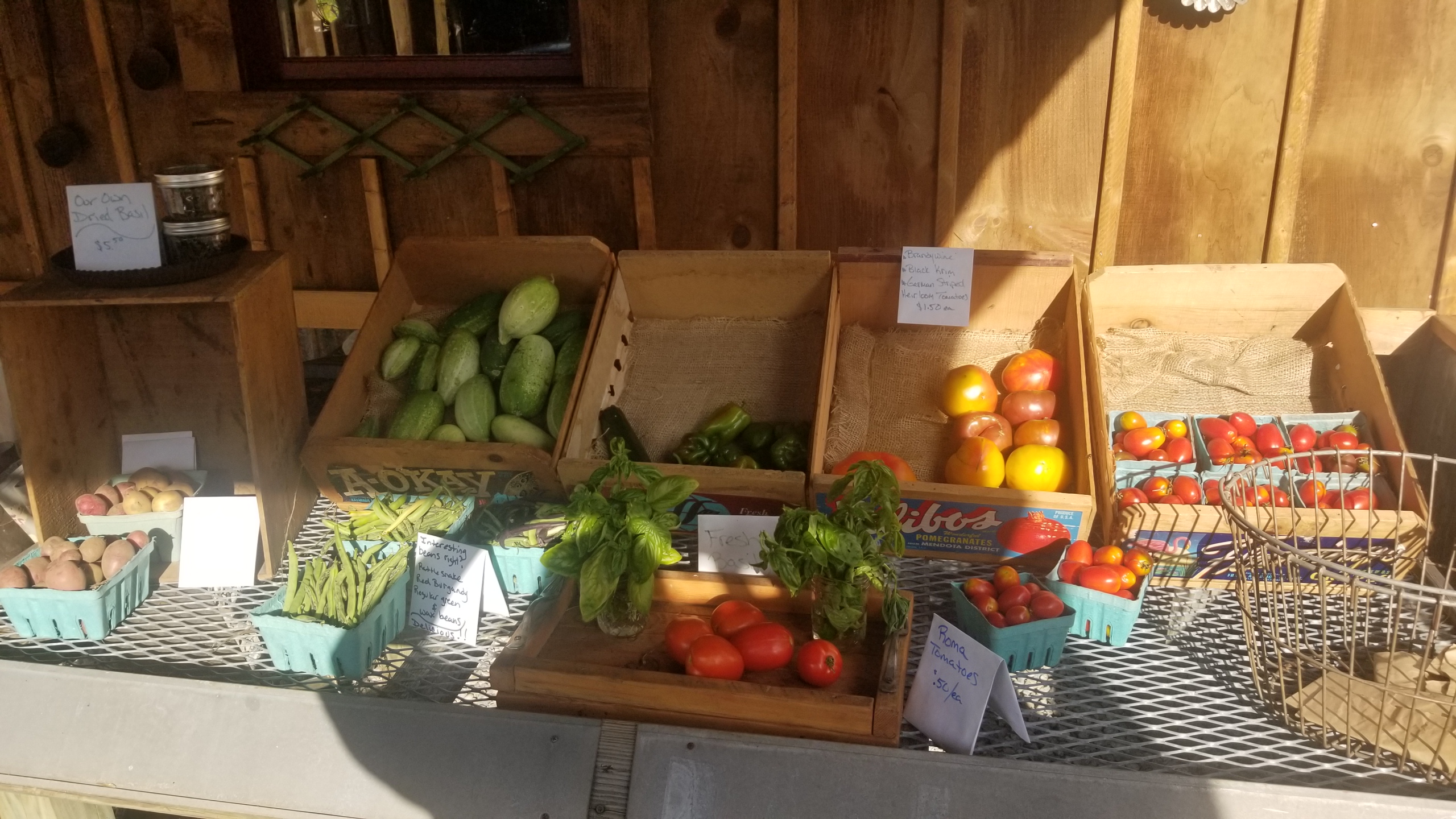 The farm stand at Whispering Pines Farm in Effingham, NH was built using recycled materials bartered for with goat milk, says owner Stacy Downs. After its completion, “We were able to provide the community and neighboring towns with wholesome, clean, healthy food.” (Photo credit: Stacy Downs)